of electricity wasted due to inefficient equipment

of electricity wasted
due to poor power factor

Each of the pain points, if not properly monitored and acted on, can lead to significant energy loss or additional cost. Abnormal energy consumption or loss can also indicate malfunctioning equipment, and thus can be used as an early fault detection mechanism.

Load efficiency refers to how efficiently a particular equipment (e.g. chiller) or zone of area (e.g. office space) uses the energy supplied to it. Poor efficiency, as compared to a historical period, to other similar equipment or areas, or against a standard benchmark, can result from wasteful practices, poor building design, and inefficient or malfunctioning equipment.

Poor load efficiency can result in as much as 30% of losses. Identifying the cause(s) is one of the important functions of a good energy management program.

Load energy consumption is fungible with its carbon footprint. We may apply the following estimates depending on the source of electricity generation:

Distribution efficiency refers to how efficiently electricity can be transmitted and allocated to the various loads within a building, beginning with the high voltage incoming supply. Often overlooked, inefficient distribution can result in significant losses.

Key distribution equipment includes transformers, switchgears, busbars and cables. Poor efficiency is often an indication of degraded distribution equipment or cabling, poor connections (resulting in hotspots) or three phase imbalance. In particular, as buildings constantly upgrade, deteriorate or change, three phase imbalance is a dynamic problem that results in additional heat loss through the neutral cable and limits the effectiveness and efficiency of transformers.

Poor distribution efficiency can result in as much as 30% additional cost.

Low cost slow burning fuel such as nuclear and coal are usually used to meet Base Load demands, while Peak Loads are handled by using expensive fast burning fuels such as kerosene. Thus generation companies normally commit their customers to a contracted demand amount so that they can better predict base demand and avoid unnecessary switching to peaking power generation. When customers exceed their contracted demand, they will be required to pay a maximum demand penalty (or higher tariffs).

An organization, when dealing with power procurement, must ensure that they minimize their contracted demand, yet at the same time make sure that the contracted demand is high enough to cover their monthly maximum demand. This requires real-time monitoring of the building’s demand (including which equipment or tenants are contributing most to the demand) as well as ensuring the powering on of major equipment is properly scheduled to prevent a demand surge. When a demand surge is detected, active intervention in the form of load shedding (powering down secondary non-critical loads such as lighting or water fountains) can also help mitigate the situation.

As electricity markets become more sophisticated, many power companies also offer interruptible load programs. In such a program, the power company, in lieu of switching to peaking power generation, pays end consumers to shed loads to release demand. Thus active demand management can be a significant revenue generator for an asset owner.

Power quality refers to the ability of electrical equipment to consume the energy being supplied to it. Power quality issues such as poor power factor (e.g. excessive inductance), voltage instability, excess harmonics can result in ineffective use of the energy supply and in certain cases, equipment damage and safety incidents.

Voltage stability is critical for maintaining proper operations of many equipment. Voltage events such as spikes/ dips, swells/ sags and over-/ under-voltage must be alerted and acted on immediately to prevent large scale equipment damage.

Power factor is a measure of the amount of power that can be used (real power) versus the amount that is trapped in parasitic magnetizing-demagnetizing (inductive power) or charging-discharging cycles (capacitive power). In general, most facilities exhibit a net inductive power situation, which if not corrected by capacitor banks, will result in the power company needing to supply more power than needed to the facility. This will result in a higher heat loss from distribution. New or deteriorating equipment will affect the power factor of a building, thus necessitating real time monitoring. With the popularity of electronic and computing equipment in modern facilities, electronic noise generated from the power supplies of these appliances contribute significant harmonics to the electrical network. Energy trapped in higher harmonics cannot be harnessed for effective work and is dissipated as heat loss; in addition the harmonics complicate power factor correction by damaging building capacitor banks.

Poor power quality management can result in 10% to 55% of additional energy wastage and potential equipment damage and safety problems. 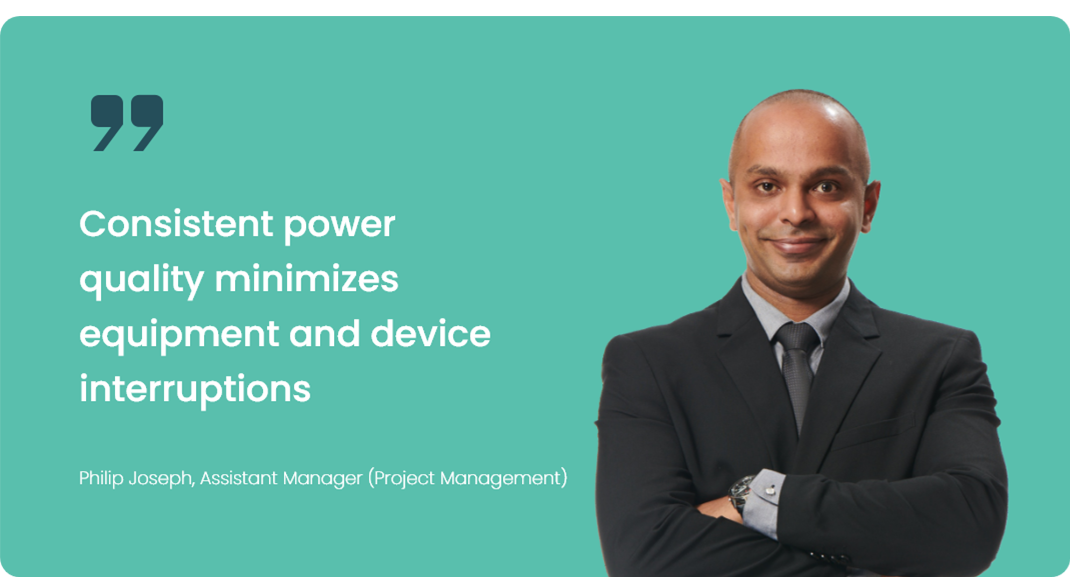 Reach out to our Tesseract® Expert

Relieving pains in the industries

Add Tesseract to your Homescreen!